Together review: It’s hard to take your eyes off this unflinching domestic lockdown drama 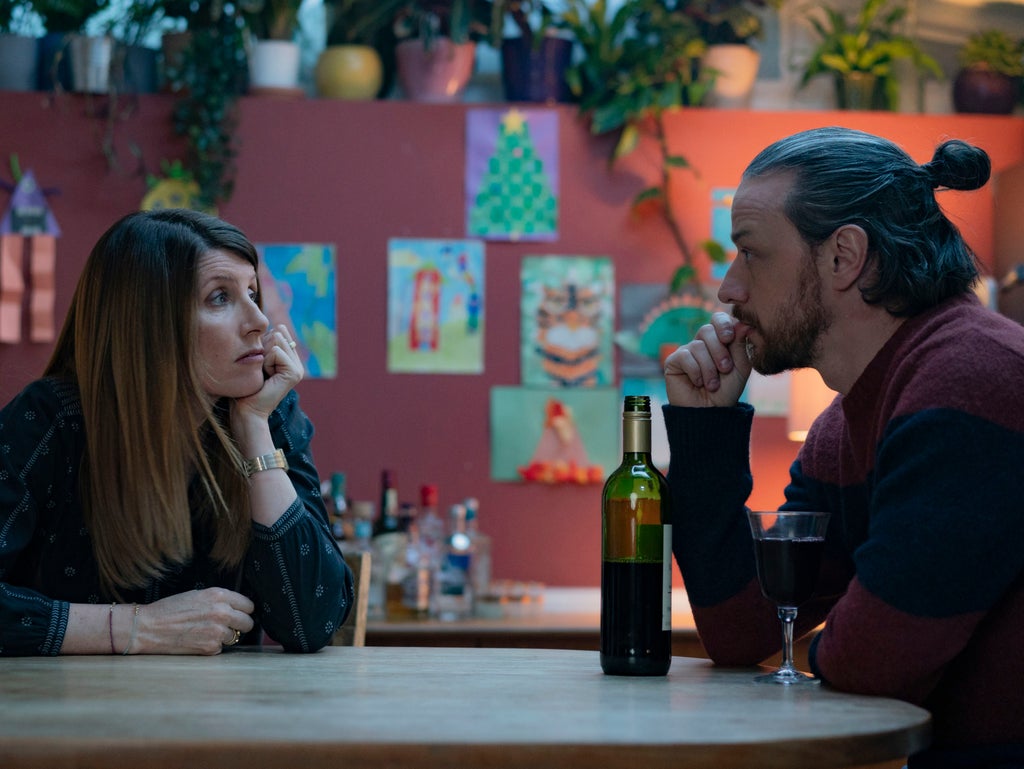 Here’s an early contender for what may be a burgeoning genre: the lockdown domestic. Dennis Kelly’s new feature-length film, Together, is an unflinching look at a middle-class couple, played by Sharon Horgan and James McAvoy, as they weather the pandemic within the confines of suburban comfort. Directed by Stephen Daldry, it’s more a play than a traditional TV drama, unfolding in a sequence of dialogues and monologues – many of them long single takes – in which both main characters continually break the fourth wall. It’s as though the camera has been invited in to evaluate them: as individuals, as a couple, as parents, and as citizens creaking under the strain of the times. The result is a claustrophobic, and at times difficult to watch, 90 minutes in which the two stars are given rare freedom to showboat.

Kelly worked with Horgan on the Noughties sitcom Pulling, and he apparently wrote this script with her in mind. The part is a beautiful fit for her strengths. Neither of the main characters is named. Horgan’s character, “She”, is a charity worker – a classic metropolitan liberal with an acerbic wit, a short fuse, and a heart that might not be as warm as she likes to think. McAvoy is her counterpoint, a Scot with conservative leanings and the son of working-class parents, who runs his own consultancy in something nebulous and digital. Coronavirus exposes the hypocrisies in both their outlooks. “He” is a tooth-and-claw free-marketeer until he needs Rishi Sunak’s bailout money. She is a woolly humanitarian until it affects her own family. McAvoy and Horgan are both blessed with a quick turn of pace, which keeps their long scenes unpredictable. A gag can turn into a row. A moment of sentimentality can turn into a row. A row can give way to tenderness. It’s refreshing to see McAvoy in something more intimate than the action blockbusters he spends most of his time on these days, although there’s no evidence his biceps spent any time on furlough.

When Together is good, you cannot take your eyes off it. The protagonists start out at each other’s throats, as one of those couples whose relationship survives mainly because they don’t often have to see each other. Lockdown forces them to have difficult conversations: about their relationship; about her ailing mother; about their 10-year-old son Artie, who drifts in and out of the background while the question of how much he knows, and how it will all affect him, hangs over all the confrontation and recrimination. Dates, fatality figures and news stories pop up on screen to mark the passage of time. He and She react to the news with a mix of fatalism, fury, boredom and amateur epidemiology. It’s a pity history keeps butting in like this, as the most memorable events take place when the story drifts furthest from the real world and into the lives of these invented characters. The stars play even their gravest scenes with a confident lightness of touch. There’s a mushroom-picking incident that will bring a smile to fans of Phantom Thread. What does “together” mean when it comes to a pandemic? Sex? Commitment? Stoicism? Civic solidarity? Keeping it together? Nobody has a clue.

Sometimes Together is very funny. I expect many viewers will relate to its vision of the realities of life in lockdown. Its depiction of the gap between the irrepressible people we heard about, who spent the time taking up new hobbies, and the rest of us, who were just trying to limp across each day, is spot on. There are moments, however, when the monologues lapse into bloviation and it feels too much as though Kelly is using his characters to grind his personal axes, rather than sending up his characters’ self-regard. A long speech in which She explains exponential growth is particularly guilty. Horgan and McAvoy convey doubt and anxiety so well that it’s jarring to see them declaim with complete certainty. Some of the musical choices are surprising, too. There’s a distractingly on-the-nose Christmas number halfway through, as Artie watches a Zoom choir singing “In The Bleak Midwinter”. When I heard “Wellerman” break out as the credits rolled, I burst out laughing. Was I meant to? It didn’t feel like it. Then again, maybe that’s the point: when it comes to the past 18 months, the right response has rarely been clear.